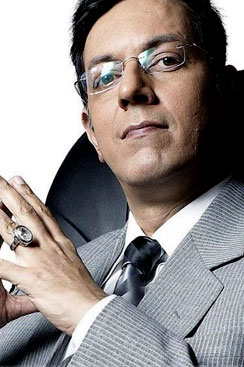 Rajat Kapoor has grown into a familiar over the years with regular appearances in commercials and playing character roles in movies when he is not directing or writing them.

Kisna: The Warrior Poet (2005) saw him as Prince Raghuraj. He wrote, directed and acted in Mixed Doubles (2006) with Konkana Sen Sharma, Ranvir Shorey and Koel Purie. It was a story about a man who wants to pep up his mundane married life.

Madhur Bhandarkar?s successful Corporate (2006) saw him in the role of Vinay Sehgal, the head of a company who is willing to do all it takes to beat competition. He was seen in movies like Bheja Fry (2007), Jaane Tu Ya Jaane Na (2008) and Dasvidaniya (2008).

His next release in 2009 is Saurabh Shukla?s I Am 24 with Neha Dhupia, Ranvir Shorey, Lilette Dubey and Vijay Raaz.

Director Rajat Kapoor has directed many movies that fall outside the mainstream category. After Taraana (1994), he worked with Irrfan Khan, Naseeruddin Shah and Alyy Khan in the ?whodunit? style Private Detective: Two Plus Two Plus One. He also wrote the screenplay.

After Hypnothesis (1998), Jojo and the Chair (2001), he wrote and directed the comedy Raghu Romeo (2003)that went on to win the National Film Award for Best Regional Film (Hindi). Mithya (2008) showed Ranvir Shorey as a man mistaken for an underworld don.

His recent directorial venture, set to release in 2009, is A Rectangular Love Story with Ranvir Shorey and Purab Kohli.
Buy
Rajat Kapoor
Movies