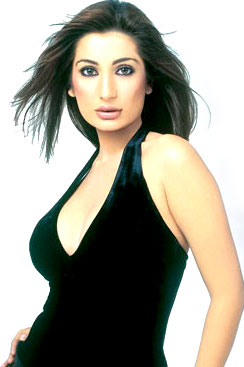 Born in Iran, Negar Khan (sometimes credited as Nigar Khan) grew up in Norway and studied in Australia from where she obtained her bachelor's and master's degrees respectively.

She was deported from India for not having a work permit. She shot to fame with her appearance in an Indian language video entitled 'Chadti Jawani' remix video and numbers in Indian movies entitled Rudraksh and Shaadi Ka Laddoo.

She took part in an Indian film entitled Double Cross, in which she played as pole dancer. In preparation for her role, she took pole dancing classes in London also.

She also acted in the Italian movie Vita smeralda with actor Luigi Cassandra by Jerry Cal? in 2006. In 2009 she was one of the contestants in the Norwegian Paradise Hotel.

Negar Khan was married to Indian actor Sahil Khan but apparently Sahil called off their marriage citing Negar's mother interference and the distance between them as the main factor.
Buy
Negar Khan
Movies