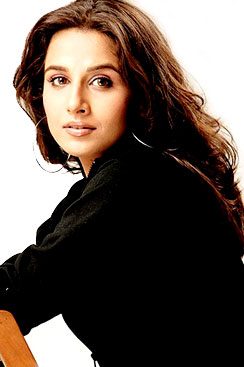 Vidya Balan is a Tamilian from Kerala. She is from the Iyer community. She comes from a middleclass family from Palghat, on the border of Tamil Nadu and Kerala.

Vidya did her schooling from St Antony's School and later on joined St Xavier's College from where she graduated in sociology.

When she was doing her MA from Mumbai University, she was offered a role in a Malayalam film titled Chakram with Mohanlal, one of Vidya?s favorite actors. However, the project was shelved mid-way and Vidya had to wait for few more years to make her movie debut.

She made her debut as a model in a Surf Excel advertisement in 1998. She has acted in scores of ad films, most of which were directed by Pradeep Sarkar.

A couple of months later, she featured in three music videos (again directed by Sarkar) for ?Euphoria?, Shubha Mudgal and Pankaj Udhas.

Vidya Balan started work as an actress in the Malayalam movie Chakram, paired against Mohanlal, however the film was abandoned mid-way through production. After making her debut in television advertising as a model for a Surf Excel advertisement in 1998, she proceeded to do over 25 TV ads, (mostly directed by Pradeep Sarkar), followed with a variety of acting stints in music videos (Euphoria, Shubha Mudgal and Pankaj Udhas), Hindi TV soap operas (Hanste Khelte and Hum Paanch) and a Bengali movie, Bhaalo Theko, for which she won the Best Actress Anand Lok Puraskar award in Kolkata.

In the meantime, she acted in Bengali movie Bhalo Theko with actor Joy Sengupta. She even won the ?best actress? Anand Lok Puraskar in Kolkata for her performance in the movie.

It was in Mumbai, during a pop concert, when filmmaker Vidhu Vinod Chopra approached her to play the female lead in his movie Parineeta, to be directed by Pradeep Sarkar.

Vidya had to go through 40 screen tests and 17 make-up shoots before she was finally chosen for the lead role in the film.

Vidya has a very traditional Indian look in contrast to most of today's Bollywood starlets. She is associated with AmFar (Americans for AIDS Research) and Hale House, a home for children born with HIV and those affected by Drug Addiction. She also involves herself with the Harvard AIDS Institute, by Hosting Forums and participating in events throughout the year. No wonder that Vidya Balan is one of the most talked about names in Bollywood today.
Buy
Vidya Balan
Movies