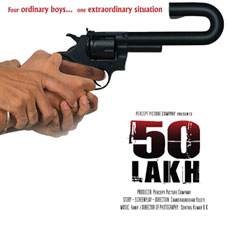 The movie is a story of five young friends, in Hyderabad. Or perhaps it's the story of everyone searching for a livelihood anywhere. These friends, four boys (Ramu, Shankar, Kumar, Vivek) and a girl (Aditi), are middle-class people with middle-class aspirations.

In Mumbai, mafia don, Irfan Khan decides to shift operations to Dubai as the Narcotics Bureau raises the prize on his head to Rs. 50 lakhs. As international airports are under surveillance and borders sealed, he hatches a plan. The plan is to get into a domestic flight in Hyderabad with the Maharashtra Home Minister. Irfan decides to travel incognito while four of his associates will hijack the flight to Kathmandu in Nepal. In Kathmandu, the hijackers would allow all the passengers, except the minister, to leave. The security forces, concerned about the minister, would not bother about the freed passengers. Irfan, one amongst them, would quietly slip away to Dubai. For this plan to succeed Irfan seeks to recruit four fresh boys, ones without police records.

But the Intelligence Bureau forms a crack team with Deputy Director Zaheer Khan as the head to track the don down.

Things go from bad to worse for the five friends struggling with careers that don?t take off. Ramu takes a decision that shocks the others.

They come face to face with the dreaded Irfan Khan. From here on their lives changes for five endless days. How five ordinary, callow youngsters battle an extraordinary situation forms the rest of the tale.