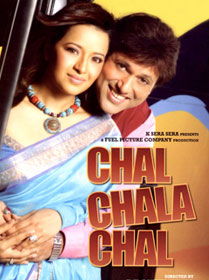 This week is special! Three new releases -- DEV D, MERE KHWABON MEIN JO AAYE and CHAL CHALA CHAL -- and all three are vying for 'Worst Film Of The Week' award. The winner is, hold your breath, CHAL CHALA CHAL. It wins hands down!

There's nothing right about this comedy, which turns out to be a tragedy for the hapless viewer. The direction is bad, the script is pathetic, the editor seems to have gone on a vacation, the actors scream their lungs out...

CHAL CHALA CHAL rests on an outdated concept, something that might've worked 35/40 years ago. On second thoughts, CHAL CHALA CHAL is so bad, it would've failed even then.

Deepak [Govinda], a simpleton, has been switching jobs as he does not want to succumb to the corrupt system. Since years, with unwavering efforts, financial hardships and an unshaken faith in the judicial systems, he has been helping his father [Om Puri] in a legal matter.

His father is fighting a court case against the school to get his due provident fund and pension. He later wins the case and the school is ordered to give a part of its property as compensation, if there is no money in its funds. And thus Deepak's life gets an addition: a bus.

Instead of selling it off, acting on his father's advice, he decides to run the bus, while the rest of the family members -- two sisters Chhaya and Arpana [Upasana Singh and Amita Nangia] and the ghar jamai-husbands [Asrani and Manoj Joshi] -- are against it. Their primary interest is in selling off the house.

Sundar [Rajpal Yadav], who is desperately trying for an American Visa, is also an age-old friend. He comes in handy with initial investments and they establish a company, Chal Chala Chal Transport. And so begins the ride of their lives.

You ought to have nerves of steel to bear this film. There's no story in the first place and the screenplay, hence, is non-existent. Worse, the edit is so bad that, for a second, you feel the reels may've got interchanged in the projection room.

Here's a sincere advice to Govinda: Act your age. It's indeed sad to see the actor being reduced to such roles. Rajpal Yadav is wasted as well. And what is Om Puri doing in this film? The remaining actors [Asrani, Manoj Joshi, Razzak Khan, Asif Basra, Murli Sharma, Upasana Singh, Amita Nangia and Reema Sen] are mechanical.

On the whole, CHAL CHALA CHAL is a terrible film in all respects. Move over CC2C, CCC is here.
Read More