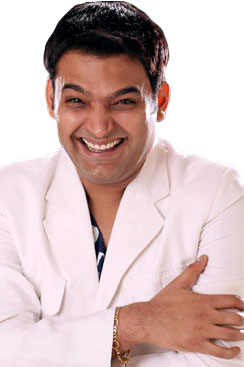 Kapil Sharma started his career from reality shows and comedy. He participated in a comedy reality show Ustaadon Ka Ustaad (2008). the contestants of Comedy Circus performed against those from Great Indian Laughter Challenge, He also co-hosted comedy show Chhote Miyan (2008) with Juhi Parmar on Colors. In 2009, he joined the comedy reality show Hans Baliye (STAR One), as a wild card entry, along with Ginni as a partner. He also co hosted the first Punjabi international film awards in Toronto in 2012.

He also co-hosted Great Indian Laughter Challenge Season IV with Chandan Prabhakar. He won Comedy Circus Ke Taansen and has worked on comedy show Comedy Circus Ka Naya Daur with his partner Shweta Tiwari and won it. He is a man of multiple talents. He has done serious roles in theatres but has also got a perfect sense of timing when it comes to humor. He is also a great singer and showed his talent in Star Ya Rockstar. He was a wild card entry and reached up to the final where he came second. He also won Kahani Comedy Circus Ki. Even though Sharma wants to be concentrating more on various acting roles, he is known for his sharp comedy on stage.

Kapil Sharma marks his debut as a producer with TV show ?Comedy Nights With Kapil?. In this series, he will be seen doing multiple avatars, that of an actor, scriptwriter and producer in his production debut. The show is likely to hit the small screen in June on Colors.
(wikipedia)
Buy
Kapil Sharma
Movies