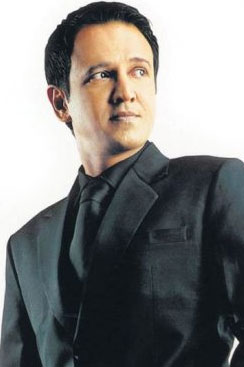 Key Key Menon was raised in Ambarnath and Pune, Maharashtra. His early life was in "H" type Rangehills, Khadki which were factory quarters for those working in the ammunition and high explosives factories. His father was popularly known as "Cashier Menon". His parents moved from Kerala to Mumbai at a young age.
Kichu, as Menon was known among friends, studied at the St Joseph's Boys High School in Khadki. He passed his 10th grade in 1981. He did his Bachelors (Physics) from Mumbai University and his MBA from the Department of Management Sciences at the University of Pune, graduating in 1988 with a major in marketing. He was popular in his class as a singer of ghazals.
Menon's initial focus was working in the advertising industry. He was involved in the first Kinetic Honda and Marlboro cigarette advertisements in India. He started his career in theatre productions where he met his wife, Nivedita Bhattacharya. He gradually moved to television acting and finally film acting. He made his film debut with Naseem (1995), followed by Bhopal Express.
During his struggling days, he was a regular feature at the Lunar Cafe, a small restaurant near the Santa-Cruz (East) bus stand.

In the early years of his career, Menon worked in TV shows such as Pradhan Mantri and TV movies like Zebra 2 and Last Train To Mahakali. Menon was first noticed in Hazaaron Khwaishein Aisi, where he was greatly appreciated with fellow newcomer Shiney Ahuja, and received much acclaim for his performance. His performance as the anguished DCP Rakesh Maria in the movie Black Friday has been widely appreciated and acclaimed. The movie, based on the book by journalist S. Hussain Zaidi on the 1993 Bombay Bomb Blasts, awaited an Indian release for almost 2 years before its final release on 9 February 2007. It was featured at the Locarno International Film Festival and received widespread praise. Kay Kay Menon's portrayal of an honest, but human cop (when checking the house of the accused, he spots bananas in the refrigerator and picks one up to eat, since he hadn't eaten well that day. Seeing the look of the accompanying constable, he says to him, "you can take some too.. there's more in the fridge"). The Sunday Edition of the Indian Express described his performance, "Excellent as always".[citation needed] In 2007, he acted in the commercially and critically successful Life in a... Metro, as the adulterous husband of Shilpa Shetty's character. In 2008, he was highly appreciated for his performance in the film Shaurya. He played the role of a protagonist in the critical and commercial failure, Drona, starring alongside Abhishek Bachchan. In 2009, he starred in The Stoneman Murders where he played a police officer on the hunt for the Stoneman serial killer. Kay Kay will now be seen in 'Drream Man', a new film by Makrand Deshpande. The film is a spoof on Bollywood. The versatile actor will be seen in 14 roles against Cast: Bollywood Actors Afzaal khan, Kay Kay Menon,Vasudha of (Aasma band) and Amit Mistry
Buy
Kay Kay Menon
Movies