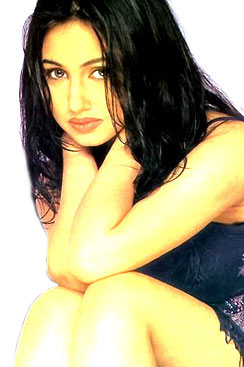 Rinke Khanna is the younger daughter of celebrity parents 'Dimple Kapadia' and 'Rajesh Khanna'. She did her Communications course from Boston and has done a couple of plays so far. Her penchant for stage saw her doing plays like 'Magic Pill' in English and 'Inshallah' in Hindi.


Pyar Mein Kabhi Kabhi is a film for youngsters because this movie sees the debut of many newcomers with Rinki Khanna. In fact many people are making their debut from this movie, right from the hero-heroines to singers, lyricists and music directors. In this movie she plays the role of 'Khushi' who transforms happiness to all her friends and herself in college.

It is reported that she has became editor of an upcoming youth magazine which is believed to be the Indianized version of ?Seventeen?, the international girl magazine.

The latest on Rinke?s front is that she has been signed to play the female lead in Bangalore-based English playwright Mahesh Dattani?s forthcoming flick ?Mango Souffle?. Her co-star in the film is yet to be finalized.


?Mango Souffle? is based on Dattani?s own famous play titled ?On a muggy night?.
Buy
Rinke Khanna
Movies