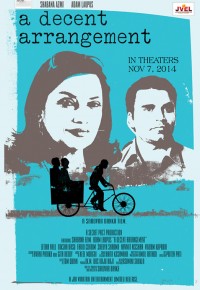 A Decent Arrangement is a contemporary comedic drama that explores the complexities of ethnic identity and the choices brought about by the shrinking globe. Ashok Khosla, an aimless Indian-American copywriter, travels to India seeking an arranged marriage and with it an opportunity for emotional simplicity.

Guided by his well intentioned but overbearing cousin Preeti, he meets prospective brides and their parents but he has difficulty connecting across the cultural divide. By chance Ashok meets Lorie, an American woman traveling through India in search of new experiences. Lorie s perspective challenges the insular Ashok to think about the choice he is about to make.
Meanwhile Ashok is set up with Amita, an Indian woman burdened by a sense of tradition but struggling to approach life on her terms. Unexpectedly attracted to her, Ashok is intrigued by Amita s conflict, which he finds similar to his own.
As the process continues, the bond between Ashok and his Indian family grows stronger, and he begins to address the realities of a proposed arrangement. Under the influence of his new relationships, Ashok examines not only his place in two cultures but also his own motivations.

As an impending engagement to Amita approaches, Ashok s parents arrive to cement the deal, setting off events that force Ashok to finally seek his own resolution.
Read More