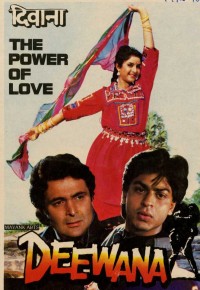 Kajal (Divya Bharti) falls in love and marries a famous singer Ravi (Rishi Kapoor). They live their newly married life happily for a while, until tragedy strikes. Ravi's greedy uncle (Amrish Puri) and cousin (Mohnish Behl), who are determined to lay their hands on Ravi?s wealth. Ravi's cousin first tries to rape Kajal, but fails when Ravi beats him up. Therefore, Ravi's greedy uncle Pratap hire hoodlums to kill Ravi and he is thrown off a cliff. Along, with Ravi, Pratap's son dies.

Kajal?s mother-in-law (Sushma Seth) takes Kajal away from the depression of losing her husband and start a new life. In a new city, the widowed and depressed Kajal tries to get over her painful experience. One day a young man Raja (Shahrukh Khan), accidentally hit kajal's mother-in-law, Kajal scolds him and he then falls in love with her. When he told Kajal he loves her Kajal tells him that she is a widow. Raja asks his dad, but his dad refuses. Raja's dad asks a bunch of thugs to get rid of Kajal. Raja tells his father that he is not his son anymore and that he will marry Kajal. Raja begs Kajal's mother-in-law to have Kajal marry him. Her mother-in-law too feels that she should marry again and persuades her to marry Raja. Kajal and Raja get married. Raja tells her that he will not touch her until she accepts him. Raja looks for a job and his friends open a garage with him. One day, Raja went to check out a jeep. The brakes failed and he had an accident. Kajal was shocked when she heard this. She runs to Raja to see him. When they came back from the hospital Kajal accepts him and falls in love with him.

Everyone lived happily until one day Raja rescues a man from hoodlums, treats him in a hospital, and befriends him. When Raja tells Ravi that it is his wife's birthday, Ravi was shocked because his wife's birthday was on the same day. But, Ravi didn't know it was Kajal. When Raja brings Ravi Kajal is shocked to see her husband's new friend is none other than her first husband Ravi, who apparently survived his uncle's attempt to kill him.

When the truth is revealed, Kajal stays with Raja. Ravi's mother leaves with Ravi. Ravi's uncle had thug spying on Sharma,a lawyer. He figures out that Ravi is alive. Pratap kidnaps Raja and Kajal. A few of Pratap's thugs tell him he wants a deal. Pratap says to sign the papers and then he will let them go. Pratap tries to kill them when Raja appears just in time. Raja escaped. But, they didn't know where Kajal was. After beating Pratap up, they find Kajal, who is tied up with a bomb strapped around her. Ravi manages to switch off the bomb and takes it off her. Pratap appears and says he will kill Raja and make Kajal a widow again. Ravi protects Raja and he and Pratap fall down and Ravi sets the bomb off causing a large explosion killing them both Pratap and Ravi. Kajal and Raja stay together.
Read More