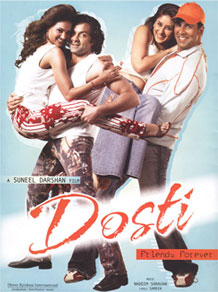 They had nothing in common. Karan (Bobby Deol) was wealthy and a mansion was his habitat.
Raj (Akshay Kumar) had empty pockets and the sky was his roof.

Karan's jet ensured that he could fly if he wanted. Raj could only depend on his two feet.
Karan had a family and yet craved love. Raj had love to share, but craved a family.

Karan was the eternal Casanova. Raj was the proverbial one-woman man.
Karan had it all, and yet felt empty. Raj had nothing, but his heart was full.

They were two people as different as can be.
Yet they found a common ground. One that led to the glorious road of Friendship!
Their bond was unshakable.

If Karan gave Raj a home and all the material comforts, Raj gave Karan a shoulder and all the emotional security. If Karan supported Raj at every step, Raj covered up for all of Karan's misdoings. They laughed together, lied together, loved together and fought the odds together all in the name of friendship.

Their blind faith in each other attracted the envy of the world.
But it was this very world that never let them forget that theirs was not a relationship of equals. And how long could an unequal relationship sustain?
Karan and Raj defied conventions proving that true friendship was above all such trivialities...
But like a bolt out of the blue came a raging storm that threatened to sink the ship that housed the sentiments of the two friends.
Was it ego? A misunderstanding? Or something more?
Will it mean the end of their friendship?
Will they succumb to it or will their bond survive the grueling test of time?

Many talk about friendship. But only a few comprehend its sanctity.
Dosti is for all who have a true friend ....Or truly want one.
Read More