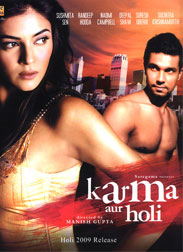 Meera (Sushmita Sen) & Dev (Randeep Hooda) play a couple living in New York. After a few years of marriage and togetherness, they seem to have lost the magic in their relationship.
Act - 1
It is the eve of Holi, a festival of colours that heralds the coming of spring in India. Dev and Meera plan a get-together with a few close friends and relatives at their place.
The invitees are: Javed (Armin Amero) a flamboyant New York based struggling filmmaker and a friend of Dev and Meera, Jenny (Naomi Campbell), Javed's girl friend, an aspiring actor. Vani (Rati Agnihotri), Meera's elder sister, who has a son Vikram (Chandan), a teenager, who is unlike his peers, thanks to his over protective mother. And Shekhar (Suresh Oberoi), Vani's husband, who has almost no ambitions, and consequently, no success. Then there is Sujata (Suchitra Krishnamoorthi), a typical Indian housewife, who is wed to an American born Indian Nimish (Shauvik) - a doctor by profession. Nimish believes excessively in his gender superiority. Preeti (Deepal Shaw) is Sujata's younger sister - A complete party animal, a rich spoilt new age girl.
There is also Megan (Drena De Niro), a Tarot card reader, a friend and well wisher of Dev & Meera.
Act 2
A party gone wrong, a joy filled evening turns serious when an unexpected, unmentionable incident before the celebrations, triggers tipsy party goers to confess their inner most secrets that have never been revealed. The results are catastrophic as this seemingly harmless game gets out of hand.
Act 3
Will their lives be the same again? Can the morning of Holi bring new promises and new beginnings to old relationships?
Find out as this Karmic encounter of cultural confluences comes full cycle.
Read More