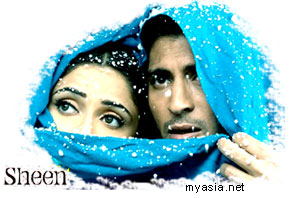 This is one film that could have shone had it been dealt in a hard-hitting manner! 'Sheen' deals with the mass exodus of Kashmiri Pundits that occurred in the 1990s. But surprisingly their grief and agony does not bring forth even a single tear in the eyes of the viewer. This is surprising if you consider the fact that the director Ashok Pandit is very close to the cause and is a spokesperson for Kashmiri Pundits. Just violence is not enough to evoke pity for the victims, someone had let him know that.

The film starts with Mannu (Tarun Arora) holding a wounded Sheen (Sheen), daughter of Pandit Amarnath (Raj Babbar), in his arms and running helter skelter looking for a hospital. He finally delivers her in safe hands. A shaken Pandit Amarnath is praying for his daughter's recovery after which the entire film goes into flashback mode.

Sheen falls in love with Mannu. If you thought there was to be parental opposition to this, then you are bound to be disappointed. The militants come in the way of their love when they uproot the Kashmiri Pundits from their land. Mannu is kidnapped by the militant leader, Shaukat (Anup Soni) who used to be a close friend of Sheen and Mannu. The reluctant Pandits are forced to seek shelter in refuge camps in Jammu.

What is the army doing? Why do they not intervene? Or are they so ineffective? Pandit Amarnath's family refuses to budge until their young son is killed.

At the camp, Sheen suddenly assumes the role of leader and coincidentally her father is chosen to go to Geneva to address a seminar of displaced people and make the world aware of the plight of the Kashmiri Pundits. He is in a dilemma whether to go on not leaving behind his daughter in the hospital. We come out of the flashback mode now. Anyway, papa decides to go for the sake of the Kashmiri Pundits. The conference is a success but somewhere the director forgot Sheen. Whatever happened to the hapless girl fighting for her life in a hospital bed?
Read More