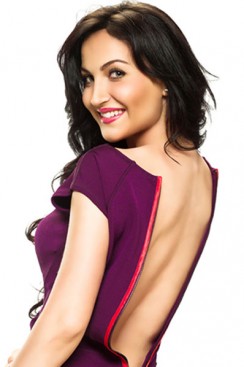 Elli Avram is a Swedish Greek actress and is now based in Mumbai, India. She performed in the Bollywood movie Mickey Virus[3] and appeared in the reality TV show Bigg Boss.
Contents

Elli Avram was born in Stockholm, Sweden. She grew up in Tyres? kommun, Stockholm. Her Greek father, Jannis Avramidis, is a musician who is now settled in Sweden; and her Swede mother, Maria Granlund, is an actress who appeared in Ingmar Bergman?s Fanny and Alexander. Avram attended Frans Schartau High School in Stockholm, from where she graduated in Society-Economics. She took an interest in figure skating, singing and dancing from her initial years. She received training in acting from her mother and aunt who runs a theater in Sk?ne County, Sweden. There was a place in Stockholm that used to sell Hindi movies and she would buy Bollywood films from there. Also she used to watch Hindi films on YouTube.

Avram at the first look launch of Mickey Virus in July 2013
At 17, Avram became a member of Sundbyberg, Stockholm based Pardesi Dance Group and gave dance performances, primarily on Bollywood songs.

Avram did some acting projects in Sweden, including the December 2008 crime drama romance movie, F?rbjuden Frukt, where she played the role of Selen - the lead character?s teen girlfriend. The movie is set against the backdrop of violent crime, where she falls in love with a boy with a criminal past.

In September 2012, Avram moved to Mumbai on a tourist visa to pursue an acting career in Bollywood. She signed up with a modeling agency and got a work visa. The agency helped her getting auditions. The first considerable project she managed to get was a TV commercial for Eveready Industries India. Avram has also acted in a TV commercial for Ricchezza Silver Jewellery, produced by TryAngles studio..nts from possessing or displaying posters of Avram in the campus and dormitories as the college authorities considered her images inappropriate.
(wikipedia)
Buy
Elli Avram
Movies