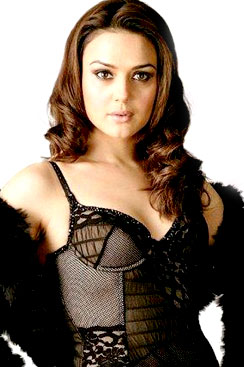 Preity Zinta, the dimpled, bubbly beauty belongs to the highlands. From the treacherous serpentine pathways of Sanjauli in Shimla, to make her presence felt in already overcrowded Bollywood, for sure, would have been tough. But that is what Preity loves'to take a challenge.

She was born on January 31st, 1974 at Shimla. Her father being in the Army, Preity did her schooling from various schools, as her late father got posted across the country. Right from her childhood days, Preity was daring, outspoken, besides being beautiful.

She entered the glamour world with a splash�appearing in a Liril soap ad, which instantly caught the eye of those who matter in the glam world. Appearing for Cadburys Perk with mischievous expressions and twinkling eyes, Preity caught Shekhar Kapoor attention, who was looking for fresh faces for his Tara Rum Pum Pum. Obviously, Preity signed on the dotted lines. Although the project never took off, but it paid big dividends to Preity as she shot to fame and bagged some good offers within no time.

'Dil Se..' was her first release along with Manisha Koirala and Shahrukh Khan and the film set the box-officer on fire. Preity played a small but significant role in the film and she impressed everybody with her acting skills, dazzling smile and pleasant disposition.

'Soldier' (1998) and 'Sangharsh' (1999) have merely reiterated the fact and by then she was on a firm ground in the Bollywood. In the former she played an impish, spoilt rich girl with great conviction. In the latter she was equally at ease executing the part of a gritty young CBI trainee in search of a dreaded killer. Also, she made a mark in the industry with her portrayal of a modern day woman, who dared to go against the acceptable social norms. She also acted in a Telugu movie, Premante Idera.

In 1999, she appeared in another Telugu movie Raja Kumarudu and as a CBI officer in Tanuja Chandra?s Sangharsh, which was inspired by Silence of the Lambs. In 2000, she played Priya Bakshi in Kya Kehna, which dealt with pre-marital sex and the ostracization of a single, pregnant woman. This was followed by Har Dil Jo Pyaar Karega with Rani Mukherji and Salman Khan and Mission Kashmir in which she played a journalist opposite Hrithik Roshan.

2001 to 2004
She starred once again with Rani Mukherji and Salman Khan in Chori Chori Chupke Chupke (2001), which was mired in controversy as it was supposed to have been financed by the underworld. Then there was the groundbreaking Dil Chahta Hai which cast her as Aamir Khan?s love interest. Dil Hai Tumhaara, her only release in 2002, did not do well at the box office. Armaan, in 2003, saw her in a negative role and she was part of Bollywood?s sci-fi movie, Koi Mil Gaya, with Hrithik Roshan. It was Naina Catherine Kapoor?s role in Karan Johar?s Kal Ho Na Ho that cinched the Filmfare Best Film Actress Award.

In Lakshya, she famously played the role of journalist Barkha Dutt. Veer?Zaara was a love story between a Pakistani woman and an Indian man and won her praise.

Koi Mil Gaya against Hrithik Roshan was another milestone she touched with a bang. So far, so good; the road ahead looks better with plum projects with big names like Yash Chopra, Karan Johar and Farhan Akhtar already in her grasp. Recently seen in movies 'Kal Ho Naa Ho' & 'Lakshya'. However, Preity, a relentless self-improver, doesn't take her success lightly. Or too seriously either, for that matter. Maybe that's why she enjoys it so much.

Salaam Namaste, set in Australia and starring Saif Ali Khan, had her in the role of Amber a radio jockey in a live-in relationship and for the third time onscreen she was pregnant out of wedlock.

Kabhie Alvida Naa Kehna, another multi starrer by Karan Johar, did well in 2006. Jhoom Barabar Jhoom in 2007 didn?t do well in India but did better business overseas.

Rituparno Ghosh?s The Last Lear got mixed reviews. In 2008, she played Kuljeet Kaur, a war-widow in Heroes and Chand in Deepa Mehta?s Heaven on Earth that was about domestic violence.

In 2009, she was seen in a cameo role in Main Aur Mrs Khanna. Her next release is Jahnu Barua?s Har Pall (2010) with Shiney Ahuja.
View More
Buy
Preity Zinta
Movies