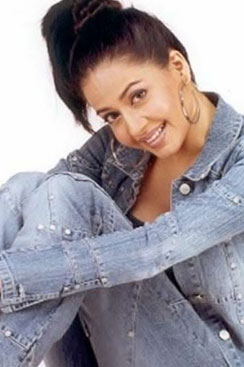 This demure, coy girl is the ABCL discovery. It was Jaya Bachchan's 'Tere Mere Sapne', which happened to be Priya's debut film and also probably one of her most popular roles. Priya, who comes across as a breath of fresh air, amidst short skirted, hep girls around, has been unlucky in between with her choice of roles.

This beautiful Punjabi lass might have looked like a typical South Indian in her first movie, but whatever guise she takes, her beauty cannot be hidden. She did a few career mistakes like "Shyam Ghanshyam" with her former co-star Chandrachur Singh and "Bade Dilwala" with Sunil Shetty but this happens with every newcomer. One movie which really gave her career a big shove was Boney Kapoor's "Sirf Tum" opposite Sanjay Kapoor. This film was the remake of a hit Tamil film and there were many expectations from it. hopefully, it lived up to all the expectations and did the leading pair a whole world of good. Priya looked good in the songs and her performance also was worth commenting.

She enchanted everyone by her childlike innocence. Mansoor Khan's 'Josh' also brought out a totally new Priya as Maria, Shahrukh Max Khan's girl. There is this interesting tale attached to the film that in a particular scene Priya was expected to slap Shahrukh and she slapped him so hard that everyone on the sets, including herself, was embarrassed and surprised.So this is what Priya is all about, a little bit of sweet and a little bit of spice!
Buy
Priya Gill
Movies